Watching Halloween Kills at home on the Peacock streaming service is nice.   I subscribed because of this movie.   I wanted to watch Yellowstone as well(also on Peacock), as I've heard great things about that show. 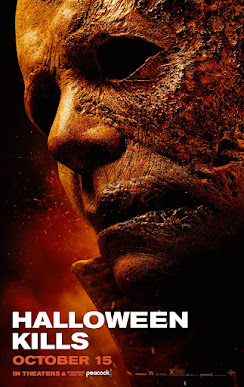 If I ever have the opportunity to watch a new release at home with an already paid subscription, I'm all for it.   I did so recently with Dune.

I wouldn't pay an extra amount, however.    An example being Disney + having a  premium charge above the subscription to watch Black Widow, that I won't do.

Halloween Kills was fun.   I slapped my leg several times and laughed at Micheal Myers's kills and the goofiness of the Haddonfield residents.  Yes, I'm a little sadistic.   I also yelled at the screen several times, saying, 'dismember Micheal, It's the only way to stop him!' or 'shoot him in the head or brain him or something!'

Haddonfielders were happy to beat him down and stare at Micheal as he lay motionless for a bit before he gets back up and wrecks shop on the angry mob.

Halloween Kills was stupid fun, and I enjoyed it.

A quick video reaction right after seeing the movie

Find my review for the first 2018 Halloween movie here.