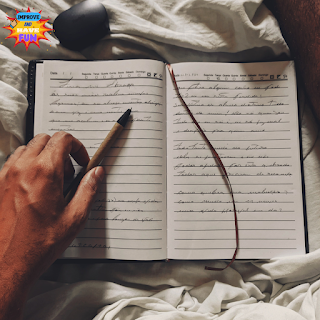 -I read the comic book...finished Eternals: Only Death is Eternal #1 and read Robin Sharma's book.

-I forgot my diary and Kindle at work, so I journaled on Grammarly today.   Can I publish this?    Should I post this?

...today I booked the hotel and airfare for Las Vegas.   This trip will be on my birthday week; mom, carol, and Camila are going.   Is lou going as well?   I hope so.   It came out to less than $800.   Thank goodness I can swing that.

...I left work early today as it wasn't as busy. I'm a tiny bit worried Jessie might say something about doing so. I'll apologize and do it less as I've now done it twice within the last three weeks(often on Tuesdays, which are my Fridays).

...Sunday, I was frustrated with co-workers Robert and Tyrice as it seemed they weren't doing a couple of things I asked them to do. So I was going to complain about them to management(Jessie). Before doing so, I asked Fred(senior bellman)for his counsel.   He gave me great advice based on his long tenure at the hotel.   'Be a team player.   If they don't pick up the calls, you do them.   Write them down on the clipboard and get paid for them,' he said.   By not complaining, my co-workers won't feel their jobs are threatened, and I'm opening the door to making more money.   These annoyances equal money-making opportunities.

...Jason(bellman)has suggested writing down everything I do on the clipboard.   These last two weeks, I've been doing so.   Whenever a guest retrieves bags and doesn't tip, tasks outside my bellman duties are all noted.   I have almost four pages listed on the clipboard this week.   Fred and Jason are only on page one.   I wonder if Jessie will call me out on this.   Jason stated in my defense, 'there's a lot of stuff I do that's not in my job description.'   I can also add that I'm not asking for an hourly bump in pay; I'm happy to do these tasks.   I ask for compensation by writing it down on the clipboard.   Let's see how this unravels.

..the taxi group with booking taxis has been overall excellent.   Sunday was frustrating as I wasn't getting much communication as it seemed only one dispatcher was working. As a result, I missed out on a couple of calls.   $20 worth.   That's ok.   It's not going to break the bank.   I've recently started getting morning calls (3 am-5 am).   Overnight Maria has helped facilitate those calls.   I gave her the bottle of Hennesy I had been storing for some time.   Tall Jose, who used to work at the hotel, paid me for that, but he's never come to pick it up.   If he ever does, I will pay him back.

...Jason(bellman)and Fred have given me lots of money-making advice at work.   I'm grateful to them both.

...Kiara (a sex worker from Newark)randomly texts me, fishing for a John.   This triggered me, and I'd like to see her, but she wants to do mornings/daytime.   I told her my schedule on my days off.   Errands during the day, I can get together at night.   Even an outcall if she wants to come over.   No response.    There are so many sex workers available.   She hasn't made it easy to see her.    No worries, there's always someone available at any time.   As I said above, not the best time to see sex workers anyway. I often would like to, but this monkeypox business is in full effect.   To get me a little more worried, I read an article on Thesun.com about how vaccinated people are still getting monkeypox.   Naturally, this virus mutates.   I will still get my shots.

...I want to try Viagra or Sildenafil.   I'd like to see how my body reacts to it and if it also works for me.   Will it give me a boner?

...I also thought that if I weren't at work at the Courtyard, I wouldn't think twice about any of these problems with co-workers.   Chris and Miguel(co-workers)were talking about doing Uber Eats.   It reminded me of something Coach Greg Adams said on his podcast about how many people have not returned to traditional jobs and are making less money to have more freedom.   It made me think of food delivery again for a moment.   But the money and health insurance are much better at the hotel.   Also, it's a lot less physical than the food delivery.

I look forward to partying here again in the future.

...Still want to do something with the action figures.   A stop motion thing preferably, but will I take the easier route and do photos?   I want to do something in stop motion (a minute or two) and edit it in Final Cut Pro with special effects.   Can I do a comic book-style photo spread with the story I have in mind?   I wouldn't need the FCP effects but some Photoshop-style effects.   This is similar to what I did with the Darkhawk Sentinel layout, but the figures' light and pictures were all over the place.   So was some of the artwork.   Let's do both and see what happens.   Time and patience will be required.   You will also learn new skills while doing so.

...Published my Resident Evil review last Saturday.   Content-wise the Star Wars vlog is next, followed by a mixtape.   While working on both, I'll begin the action figure story in a comic book style.

Popular posts from this blog

Welcome to the Paul Has Fun Blog!

January 20, 2021
On this blog, I dig into my hobbies and document my life and interests.   Thanks for spending time with me. Scroll down for the latest content.   WELCOME!
Post a Comment
Read more

December 22, 2021
LISTEN TO THE PODCAST HERE Thursday December 17, 2021.   Jason G, David and myself watched Spider Man: No Way Home at a movie theater in Times Square.   Was it the ultimate fan service film?   Listen to our thoughts. Check out the last episode here for spoiler reviews on the first two Tom Holland/Spider Man movies. Thoughts? Comments? Do so below. Contact me by email here   pvpfromdabx@gmail.com   Rate, like, leave a review! I will shout you out for sure! If you've enjoyed this episode, please support this podcast by doing any, all your shopping through my affiliate link: AMAZON:  http://amzn.to/2dRu3IM or DONATE here  https://bit.ly/2LD1mwy SUBSCRIBE HERE https://bit.ly/3tkjIbV   YouTube version
Post a Comment
Read more

April 05, 2022
LISTEN TO THE PODCAST HERE. Skerrit Bwoy returns to the podcast!   We catch up on what's he's been up to since the last time we spoke on this podcast 6 years ago.    We also discuss his first, recently released album Jesus Party Vol. 1. This is our first podcast together 6 years ago. Click here. Check out Skerrit's Jesus Party Vol. 1 here. Connect with Skerrit on his website here. Thoughts? Comments? Do so below. Contact me by email here   pvpfromdabx@gmail.com   Rate, like, leave a review! I will shout you out for sure! If you've enjoyed this episode, please support this podcast by doing any, all your shopping through my affiliate link: AMAZON:  http://amzn.to/2dRu3IM or DONATE/TIP here  https://bit.ly/2LD1mwy SUBSCRIBE Everywhere HERE https://bit.ly/3tkjIbV   YouTube version of this podcast Skerrit's Goodbye Prayer
Post a Comment
Read more